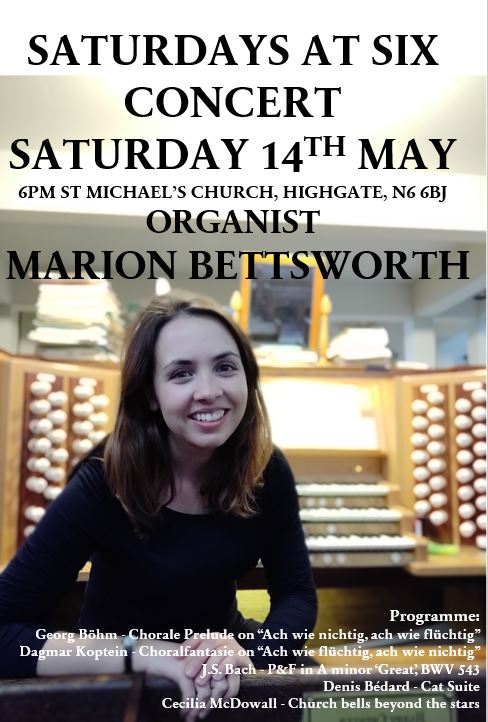 Cecilia McDowall (b. 1951) - Church bells beyond the stars

Böhm was one of the leading organists and organ composers of his time and he greatly influenced Bach’s chorale-based works. This chorale partita takes the Italian partita, a variation form using a dance song as its basis, and fuses it with the Lutheran church chorale, subjecting the melody to a set of variations. The chorale on which this partita is based has as its theme the transience or fleeting nature of human life.

Ah how fleeting,
ah how insubstantial
are man's joys!
As there is change in hours and times,
light and darkness, peace and strife,
so are our times of happiness.

Dagmar Koptein (b. 1957) - Choralfantasie on “Ach wie flüchtig, ach wie nichtig”
Dagmar Koptein is a German organist and composer. The inspiration for this chorale fantasia was a freely invented ‘funeral dance theme’ which came to her while she was improvising at the organ. The complete chorale is heard just once, as in the Bōhm, but the lower parts in the accompaniment have a powerfully distorting effect. At the end of the chorale fantasia there is a gradual increase in intensity until it breaks off abruptly, just as the listeners think it has reached its climax.

This work was written during Bach’s time as court organist to the Duke of Saxe-Weimar. The fugue, nicknamed “The Great”, features a catchy oscillating figure.

These pieces always proved extremely popular when I purr-formed them as service music at St Michael’s. They’re fun, playful, and every so slightly jazzy!

This piece was commissioned by the Edinburgh Society of Organists and had its premiere in 2013. It is one of a trilogy of organ works inspired by the metaphysical poet, George Herbert (1593-1633). It draws its title from Herbert’s Prayer (I):

Church-bells beyond the stars heard, the soul's blood,

The land of spices; something understood.

Marion Bettsworth is a radio producer, organist, accompanist, and teacher based in Hereford. Originally from Lancashire, Marion read Music at Lincoln College, Oxford, where she held the organ scholarship. She has since held the position of Assistant Director of Music at St Michael’s, Highgate (London), Accompanist for Enfield Choral Society, and the organ scholarships at St Marylebone Parish Church (London) and Alexandra Palace. She is an Associate of the Royal College of Organists and a member of the Society of Women Organists.

When she’s not pedaling away in the organ loft, Marion can usually be found cycling long distances and making radio programmes about her cycling exploits.

This recital is part of this year’s Stroud Green Festival. Please visit their website and check out other concerts happening locally this summer. www.stroudgreenfestival.org.uk

Refreshments are available and there is a retiring collection.

Directions
< Back to events